N N-dimethylformamide (DMF) is a commonly employed solvent for chemical reactions. The infrared spectrum of N N-dimethylformamide shows a lower C=O stretching frequency at 1675 cm than an unsubstituted C=O bond. That because of the contribution of the two possible resonance structures of an amide. And the bond order of the carbonyl C=O bond is reduced. While that of the carbon-nitrogen bond is increased.

Also, because of the partial double bond character, the rotation about the C-N axis is slow at room temperature. That makes the two methyl groups inequivalent on the NMR time scale. Then give rise to two singlets of 3 protons each at δ 2.97 and 2.88, instead of one singlet of 6 protons in the proton NMR spectrum. 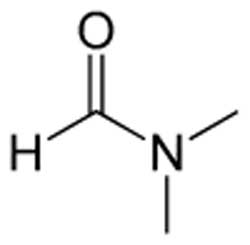 NN-dimethylformamide is also used as a solvent in peptide coupling for pharmaceuticals, in the development and production of pesticides, and in the manufacture of adhesives, synthetic leathers, fibers, films, and surface coatings.

It is used as a reagent in the Bouveault aldehyde synthesis and in the Vilsmeier-Haack reaction, another useful method of forming aldehydes. NN-dimethylformamide penetrates most plastics and makes them swell. Dimethylformamide therefore frequently occurs as a component of paint strippers.

NN-dimethylformamide is very effective at separating and suspending carbon nanotubes and is recommended by the NIST for use in Near-infrared spectroscopy of such. It is also used in the manufacturing of solvent dyes as an important raw material. It is consumed during the reaction.

Reactions including the use of sodium hydride in NN Dimethylformamide (DMF) as a solvent are somewhat hazardous. Exothermic decompositions have been reported at temperatures as low as 26 °C. On a laboratory scale, any thermal runaway is usually noticed and brought under control with an ice bath. This remains a popular combination of reagents. On a pilot plant scale, on the other hand, several accidents have been reported.